This past Labor Day, I got to hang out with Miss Io Vale and her mom and grandma. I last had Io Vale in the studio when she had a milk bath a few months ago. Mom wanted to choose a fun and different cake smash theme, so she ultimately decided on a succulent/ cactus look. She sent an inspiration image and I immediately set out on purchasing succulents. Who doesn’t love the way those little plants look?!

I had a cactus backdrop that I purchased from Intuition Backdrops, and I used a white wall panel for the flooring for easy clean up. We set up some plant boxes and put together our succulents. I added some lights to the set and we were ready to go.

The cake was purchased from O’ For Heavens Cakes and More and was absolutely adorable.

Io Vale wasn’t entirely excited about the cake, and definitely did not want to eat it. But she did dig in and play with it. We got some seriously cute images anyways!

Check out a preview of her before her big mess!

Every few months, I hold glitter mini sessions for my clients. These are always on a solid color background, and with either gold, silver or multicolor glitter. I offer dresses to use from my collection if a client so chooses. These sessions are not just for girls, but I find that most younger girls enjoy them just a little bit more than the boys. But honestly, everyone loves throwing glitter!

We set up and do just a few poses before we get into the glitter. I always start by putting a bunch of glitter in their hands and taking a picture of how it sparkles in their hands. Then I tell them to wait until I tell them to throw it at my ceiling, and close their eyes. READY, SET, GO! They always have so much fun when its raining glitter!

We always throw, blow glitter, and draw in the glitter on the backdrop floor! I love capturing all the fun they have when they play! I always get complimented on how much fun my clients always have during these sessions.

Although they are super hard to clean up after, they are definitely one of my favorites to capture and edit. I like to add in a little extra sparkle to their images from time to time.

Check out these previews of these sessions! Brianna’s boyfriend Caleb called me several months back to schedule their maternity session and newborn sessions. We set them up with many months to go before we had to meet to fit her for some dresses available in my collection.

A couple weeks before her session, Caleb called to let me know a date that they would swing by for their dress consult. He also asked me if we could fit in a surprise at their maternity session. He was going to propose!!! We discussed where we would take their photos and when/how we would set up the proposal.

On the day of their session, I spoke with Caleb again. We solidified our plans and we were going to meet only hours later. I wear my emotions on my sleeve, and felt so excited and nervous for them at the same time! I hoped this came together like he planned, and mostly, I hoped I wasn’t going to ruin their moment!

We drove out to Turtle River State Park (one of my favorite maternity session spots), and I scouted the spot it would all take place. I set them up on the bridge to take some photos as a couple. After a few shots, I asked Caleb to move to the other side of the bridge and had Brianna turn her back to lean into the bridge. I asked her to pose as if she was looking out into the river. While Brianna was looking out into the river, I signaled Caleb that we were ready to go. Caleb got down on one knee behind her, and I was just about to tell Brianna that we needed to turn around to pose again with Caleb, when we got interrupted by a few hikers!! I quickly had to signal to Caleb to get up before Brianna noticed what was happening. Luckily we were quick and Brianna had no idea what had just happened. We waited for the hikers to pass, and I returned Brianna to the pose, looking out over the bridge. This time we were ready again, and I signaled Caleb to get ready. I told Brianna that we needed to pose in the middle of the bridge, and as soon as she turned around, she put her hands to her mouth in complete surprise. There was Caleb on his knees holding her ring. Unfortunately for me, Brianna turned in such a way that she was walking towards him with her back to me. I quickly ran to the other side to get her reaction. Caleb asked her to marry him, and she said yes!!

The moment was absolutely beautiful! After Brianna had some time to get herself back together after this amazing surprise, we continued on with their maternity session. One of my favorite images is of them on the waterfall looking down at their baby!

So many great things are in store for this couple, and I am so honored to have been a part of these milestones!

I knew I wanted to bring awareness to infant loss. I put together this idea in my mind where I would do a photoshoot that would showcase women in different parts of their journey who had experienced infant loss and then subsequently given birth to or was pregnant with their rainbow baby.

A rainbow baby is a baby that is born after the loss of an infant. These losses usually are miscarriages, stillbirths, or even young infants that pass away from complications, SIDS, etc. I wanted my moms to be able to share part of their stories during this session, so others could understand in the slightest, what they had lost and what they had gained. It is such a touchy subject. A family mourns the loss of the child but celebrates the following child. They have an angel to watch over them and their new infant. It is never easy to even begin to understand the devastation of losing a baby. Losing anyone dear to you is a very hard pill to swallow.

I personally have never had a miscarriage, but I infact, suffered from infertility and then secondary infertility. When I was hoping to get pregnant with my first child, I was devastated to find out that I couldn’t get pregnant and they diagnosed me with “unexplained infertility.” How hard is it to be told you can’t get pregnant and they aren’t sure why?! I had been prescribed fertility medications and also given a few different procedures. I did manage to finally get pregnant with my first born after many years. My second daughter was actually a complete surprise! I couldn’t believe that I was able to have a child without needing all the interventions. Fast forward many, many years and a new marriage. My husband and I both had children from previous relationships and we wanted nothing more than to share a child together. After 7 years of surgeries, procedures and medications, we found out that our only way to have a child was through IVF. That was such a difficult thing to hear. IVF is not a cheap thing to even attempt. After careful consideration, we took out a loan because this was something we both wanted more than anything. IVF is not an easy thing to go through. It is an intense roller coaster of emotions. We did manage to conceive and we have a set of 2 year old twins as a result. My experience is not the same as losing a child, but I do understand the feeling of wanting something so badly, and it not resulting how you imagine. The fight of trying to have a child, and watching my friends have 2, 3, and 4 children in the time I tried to get pregnant with my first. Infertility is another topic I would love to cover, but I do see a relation between it and infant loss.

Other couples that I know have experienced a loss of a baby due to being infertile. Even though it is not the same thing, it can sometimes go hand in hand. There is such a stigma on talking about these issues and I think it is so important to bring awareness to these types of topics. I believe that these babies who have been lost and those babies who have been conceived after, deserve recognition. For that reason, I created my project. I share with you my beautiful mama’s, the angels that watch over them, and their rainbows/ siblings that are here on Earth. 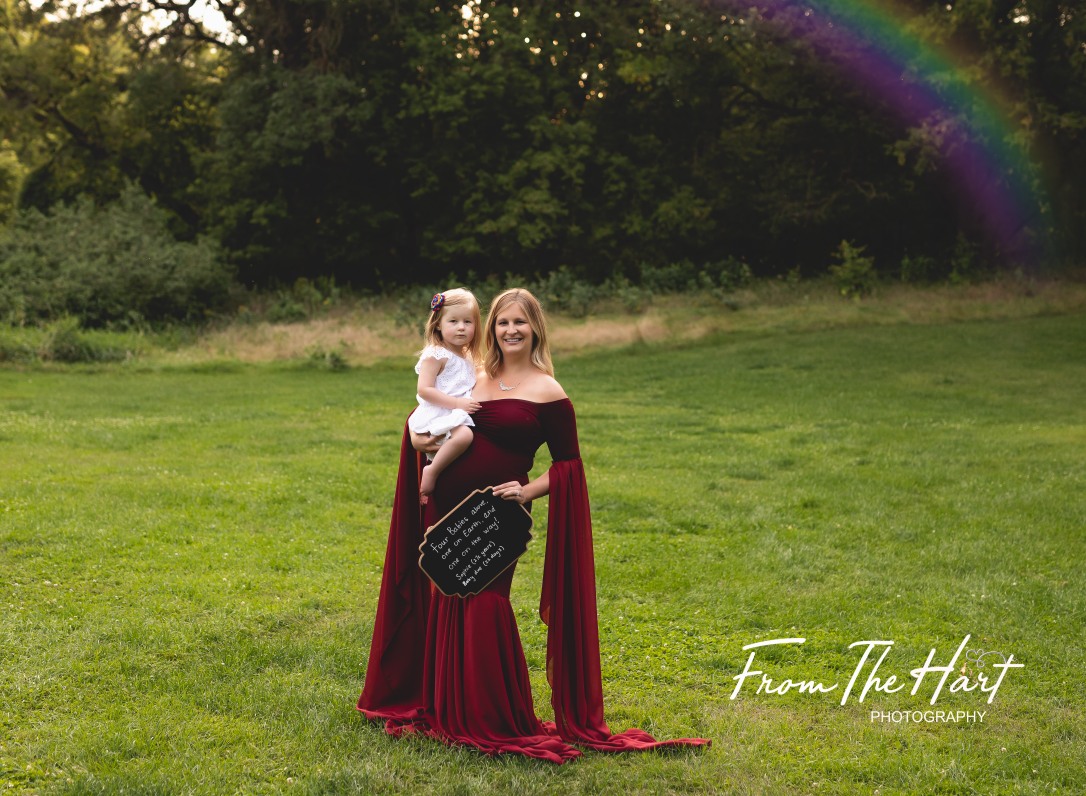 I can’t even believe its been almost a year since I had Millie in for her newborn images! I actually began photographing her family when her mom approached me very late in pregnancy to have a last minute maternity session. Her husband was in Honduras, so I wanted to make sure that she felt special for her session. We went out to Turtle River and shot during sunset to get those gorgeous glowy photos.

Only a few weeks later, I got to meet Miss Millie. She was super awake and didn’t really want to settle for her newborn photos. I could tell she already had a big personality. She had the most gorgeous hair for a newborn, and those lips!!

Millie came back at 6 months to have a special milk bath/ family session. Grandma was out visiting from Honduras and it was an exciting time for everyone! Millie wasn’t really sure about her milk bath, but we got some sweet photos. She really just wanted to eat all the flowers.

Millie was turning one and a few months ago, mom booked her cake smash session but didn’t really have any solid ideas on a theme. She wanted dark purple, navy, Burgundy type colors that would represent berries and a farmers market look. I wasn’t really able to find anything that had been done in that theme, so I knew I had 100% creative control. I had this vision in my head and I was going to execute it! We got Millie a gorgeous cake from O’ For Heavens Cakes and More here in Grand Forks. What better cake than a naked cake with some powdered sugar and berries! Mom and Dad absolutely loved the way it all came together, and I did as well! Take a peak at a preview of her cake smash session! 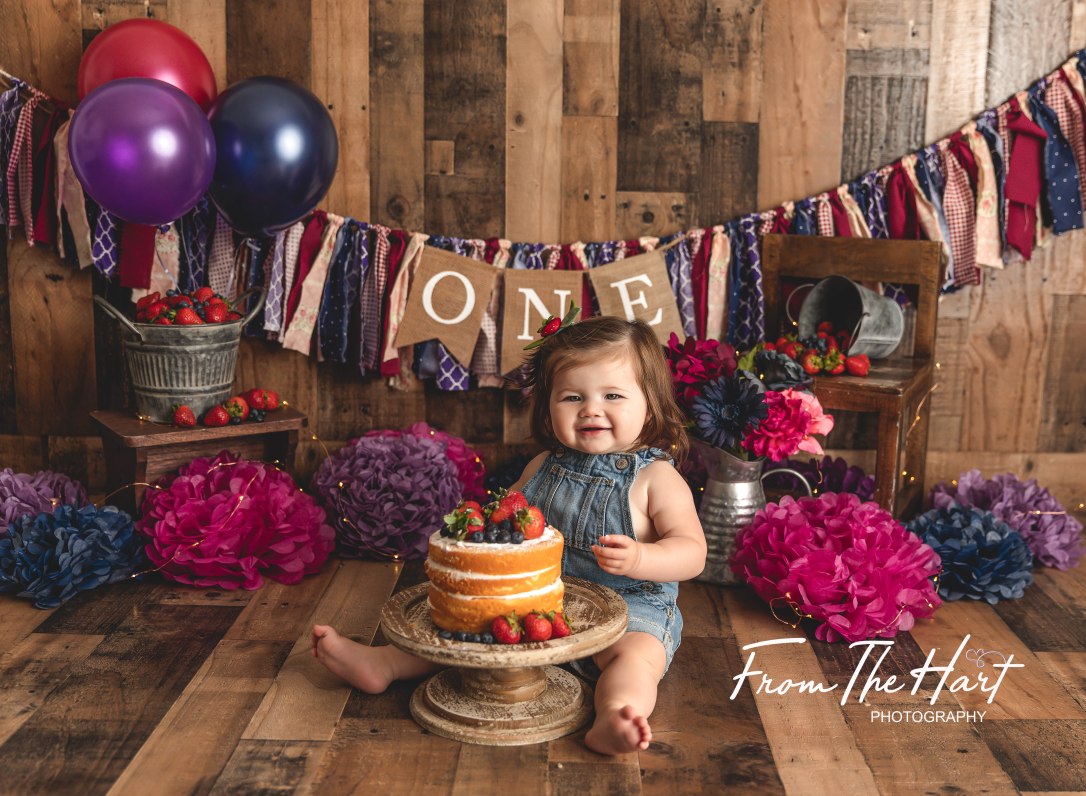